Connect with us
PUBG Introduce New Vehicle Zima For Vikendi : 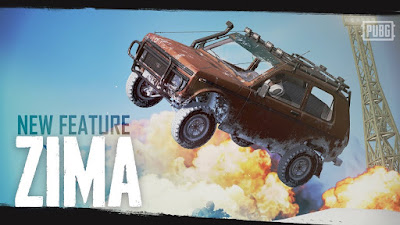 Introducing the Zima, a 4-person vehicle coming exclusively to Vikendi.It may have a lower top speed than the snowmobile or snowbike, but the Zima boasts for much better cover and can tackle the snowy slopes with equal ease.

Zima is different vehicle for PUBG.Players have lot of vehicle options along with the specially crafted Snow Mobile.But this new vehicle has something different.It is use for squads and helps player for secure travel in the game.

This new vehicle is available now on Test Servers with PC Patch #26.

Related Topics:
Up Next

PUBG new feature is live now.The PUBG Gas Can is a new explosive.You can carry more than on Gas Can.

Here is the official Video

PUBG new feature Gas Can is a new improved version.PUBG has added new features for player.Make sure to use it carefully.Using more Gas Can not increasee the damage.

For more information you can visit the official website of PUBG.

Where to find flare gun

Here is a official Video Of PUBG Deagle

Although it is a powerful weapon.But it is a very rare.If you find this weapon,it will give a you a good advantage.The PUBG new weapon Deagle is easy to carry,powerful and very good for short range.

For more information you can visit the official website

Where to find flare gun

PUBG has launched there new vehicle BRDM.The PUBG new BRDM vehicle has lots of advantages.It is powerful,flexible and a have hard body for protection.Most importantly it also have some drawbacks.It’s not allowed return fire,quite slow and can be down by heavy attacks by enemies.

Read more for getting a complete overview of the this PUBG new vehicle.

In the official page PUBG says-

“Players feeling froggy for a fight will now have the chance to call down an armor plated amphibious assault BRDM-2 by using the Flare Gun!”

In the previous updates PUBG has introduce many new vehicle.Mean while in this vehicle is complete different.This will give advantage to the squads.They can counter bridge blockage easily.But the vehicle is also slow and can be destroyed by heavy attacks.

PUBG Get Another New Vehicle | New Update Of PUBG

Can you sell things made on Canva?

Can you edit images with Canva?